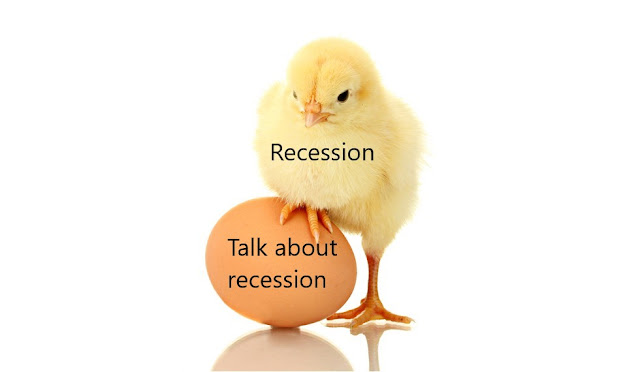 I remember my first year macroeconomics lecturer despairing from the front of the room at news outlets that fueled discussions of imminent recession. In his mind, this talk was just as central to the start of economic downturns as any other factor predicating recession. But maybe everything isn't as clear cut as that. Is it really possible that we talk our way into recessions?

The case for recession first
An extensive article by Bill Conerly in Forbes argues that actually, if we consider historical recessions and economic downturns, it may be difficult to make the case that talking about recession leads to recession. Conerly uses consumer surveys and associated indicators to measure public perception about economic health prior to recessions. Certainly whilst consumer confidence dropped in the 1990s before economic difficulty, correlation does not equal causation as Conerly points to the greater significance of the First Gulf War and jumps in oil prices as more likely to have triggered this incident. Recession in 1948-49 as well as 1954 actually occurred in spite of consumer confidence in the economy, once more linked more significantly to external factors and government policy. Certainly in the midst of a global pandemic and its associated economic blows, it would be difficult to say that we had been talking ourselves into those measures.

The case for talk about recession first
Perhaps it is more apt to say that recession talk is not always something important in the cultivation of an economic environment of recession. But sometimes, it just might be. In an age increasingly dominated by media, news, opinion pieces and alarming twitter threads, what people are talking about is more accessible than ever. And not just what your mates are talking about but discussion with claimed experts, actual experts and speculation from trusted networks. It is difficult to imagine that this has no impact on the decisions we make, particularly if you have investments or assets, and particularly if you do not have the capital to make big losses. The financial crash of 2008 is not quite out of memory, and those who lost out from the crash and its fallout are unlikely to want to find themselves in such a situation again. Media narratives will contribute to household decisions to spend money or save, whether to make a riskier investment or take a more well-trodden path. For businesses, these narratives are important for making moves to expand or contract, to continue hiring or let go of some staff. If media incessantly reports about imminent recession or indicators of recession, it can lead to a somewhat self-fulfilling situation. People hear that a recession is coming and begin to cut back on spending to dedicate more of their income to saving. This in turn reduces demand in certain markets, which may necessitate a contraction within businesses. Dominos falling comes to mind. Of course, for this to be the case, enough people would have to be responding to reports, to make noticeable dents on businesses etc.

So maybe there is a middle path; recessions are caused by a multitude of things and combinations of things. One of those things may be talk. Leaving us with the unsatisfactory answer that neither comes first necessarily.
Posted by Jocelyn Gaitskell on March 22, 2020
Email ThisBlogThis!Share to TwitterShare to FacebookShare to Pinterest