8th of March is International Women's Day so let's talk about gender diversity in economics!

Economics is slowly waking up to the idea that gender diversity is important but today the discipline is still far from equality of the genders. Women are still underrepresented at every stage of economics, from A-levels to undergraduate, Master's, Ph.D. and Professorship - the higher you go on the ladder of academic economics the fewer women you encounter. 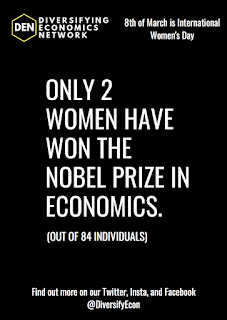 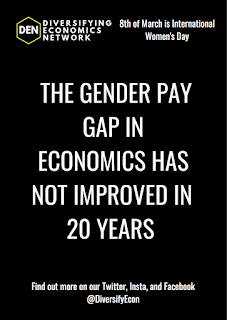 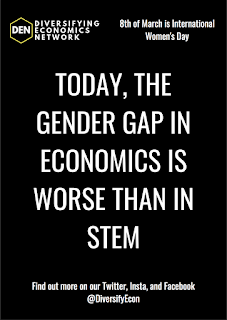 The Diversifying Economics Network (a student-run society at the University of Manchester) put up flyers around campus drawing attention to some of these facts (you should also check out our Twitter to find out more!). When you consider the intersection of gender with race you will find that the stats for Black Women are even more depressing as Anna Gifty Opoku-Agyeman and Dr. Lisa D. Cook document in a recent article for the New York Times.

When faced with these facts it is hard not to despair at times, but fortunately, it seems like change is coming. Anna Gifty Opoku-Agyeman herself is co-founder of the Sadie Collective is another student-run organization that is committed to increased representation of Black Women in the economics profession. Similarly, there are more and more diversity-networks and groups emerging at U.K. universities.

Yet to some (men) it is still unclear why we need diversity in economics. Apparently, equality in itself is not enough. Although most (men) would probably not openly stand against equality. No, instead the reason that there are so few women in economics is simply that WoMen DOnT wAnT to Do EConOmiCs or WoMEn aRe BAd aT MAtH. The second statement is not even true, but often economists prefer to rationalize things away rather than investigating and understanding why there is such a lack of diversity in economics. Maybe it's the aggressive seminar culture, the lack of female role models, or the fact that almost every economist on TV is a man in a suit.

The misconception that economics is mostly about finance, GDP, or stock markets likely alienates many talented women from considering the profession in the first place. On average it seems like women are more drawn to other "softer" social sciences (or they are socialized in this way I mean who knows) such as sociology or political science. But (!!!) economists actually study similar phenomena as most social scientists. They just use different tools. Whether asking questions about universal basic income, gender quotas, or health care, economists are sure to have something to say on the issue. Economics is a social science and studies society, not just "the economy".

Changing our public understanding of what economists actually do could help draw people from more diverse backgrounds in the field. The Discover Economics campaign, launched in 2019, does exactly that! The campaigners hope to broaden the appeal of economics and draw more diverse students into the discipline. They focus primarily on A-Level students, teenagers that will soon make a decision on what they want to study at University.

While the current statistics on diversity in economics may seem discouraging, change is coming! Campaigns such as Discover Economics and the various student societies will hopefully help draw more students to economics and create a welcoming and respectful environment. Hopefully, this means that for the next few International Women's Day I can report some progress.
Posted by Marie Kaul on March 09, 2020
Email ThisBlogThis!Share to TwitterShare to FacebookShare to Pinterest