"Eight hours labour, Eight hours recreation, Eight hours rest." This was one slogan used in the fight for shorter working days, legally defined limits to work and improved working conditions for the masses during the industrial revolution. Sure, this was for 6 days a week, but it was better than the 12 hour + shifts many were forced to do at the time. Fast forward a century or so and the accepted working week was about to be challenged again, this time from the top down. Henry Ford decided to remove a day from the working week at his factories, decreasing the weekly hours from 48 to 40. Certainly, such a move wasn't super selfless, Ford kept production targets high but just expected this to be achieved with less time. Setting this aside for now, productivity soared and so did profits. 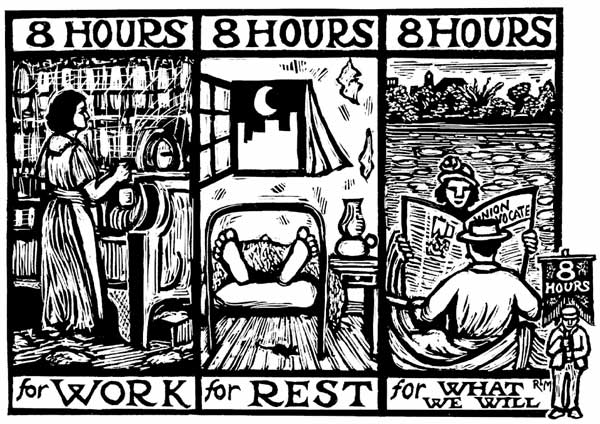 Now, debates surrounding a shorter working week are surfacing again- Labour has incorporated the 4 day week into its party policy. Losing hours whilst maintaining a rate of pay might just take us one step closer to 'utopia', lengthening leisure, reducing stress from overwork, facilitating care responsibilities and allowing citizens greater capacity for democratic engagement. But is this unrealistic, supremely optimistic tunnel vision? Despite more comprehensive systems of protection for working conditions and limitations on working hours, we appear to be more accessible than ever before (on average we work an extra 7 hours a week after leaving work) and overwork has not gone away- so can we really afford to slow down?

4th Industrial Revolution
A shorter working week may seem completely radical- the 9 to 5 is just a fact of life! But with the age of AI and machines displacing workers, we need a radical rethinking of the way we structure work. A 30% increase in productivity, as made possible by technology addressing inefficiencies, would allow the UK to drop to a four day week of 32 hours. But these benefits are anything but guaranteed;"automation will not produce more free time for ordinary workers unless adequate policy is in place to ensure it". Certainly without effective policy, businesses may instead choose to cut costs and pay workers at the same rate for their reduced hours, defeating the gains made for ordinary workers whilst also leaving many unemployed and impoverished.
Productivity
Beyond the context of a labour market about to be completely reshaped by technology, reducing hours has an impact without technology, actually causing increased productivity and thus gains for business.
A report published by the CDC in 2004 came back with a number of important findings regarding working beyond the 40 hour week;


Okay, so this is testament to the fact that working longer hours is counterproductive but actually reducing them?
When Kellogg reduced the working week to a 6 hour day in the midst of the great depression accident rates declined by 41%; this reduction was so successful that Kellogg announced "The unit cost of production is so lowered that we can afford to pay as much for six hours as we formerly paid for eight".
So not only does productivity not increase after an eight hour day, it might actually be the case that eight hours is not  the point of peak productivity.
Further studies contribute to the picture that not only does working fewer hours give us more lesiure time, it makes us happier and more productive.
For two months in 1974, the British government shortened the working week to just three days for two months. Despite this 40% drop in hours, productivity only dropped by 6%, demonstrating a rapid rise. Moreover, fewer employees took sick leave, further contributing to savings on the margin- when 57% of sick days are due to overwork related issues, shorter weeks can be an important change.
Meanwhile in France, when the less radical 35 hour week was mandated almost 60% of workers reported that the decrease had a positive impact on their work life balance and general happiness. This was just with a 5 hour decrease.
So really, it could be beneficial economically to decrease our working hours; as referenced in the above video, Britain works longer hours than many European countries and yet is less productive individually. Maybe a decreased working week can begin to change this.
Other benefits
It is easy when we are looking at things from a purely economic perspective to disregard elements that we are less able to quantify but in reality, a lot of these extra points can lead to a happier, healthier workforce. Fundamentally, less time at work = more leisure time. These extra hours can be put towards:

Posted by Jocelyn Gaitskell on November 11, 2019
Email ThisBlogThis!Share to TwitterShare to FacebookShare to Pinterest