Not even a month into my summer holidays and I have already invoked great disappointment from my family members. Yes, that's right, I have been watching Love Island, and I have been enjoying it. For those unfamiliar with the concept of the show, Love Island is a show where a bunch of conventionally good looking guys and girls get put into a luxury villa with the sole purpose of 'cracking on' with each other and finding "love"; the escapades of the villa are then aired every night to the British public (except for saturdays). You may be intrigued as to how this is in any way linked to something meaningful but for the remainder of this post I am going to be using love island to illustrate game theory. In particular, I am going to try to explain the security dilemma and the prisoners dilemma using tropes from the competition. Because maybe in this context, love is just a game.

Security Dilemma
An exciting point of the series has just begun this week- the islanders have been unexpectedly split from their partners, with the girls being sent to 'casa amour', a new villa with 6 new guys. Meanwhile the boys remain in the original villa with 6 new girls to live with. Loyalties are being tested in even the strongest couples. Let's look at the example of Curtis and Amy to illustrate the game within this situation.
Curtis and Amy have been inseparable from their first episode together, with both parties vowing that no matter who came into the villa, their heads would not be turned. There are two options available to each individual; either they can remain loyal to their original partner or they can crack on with somebody new. If both Curtis and Amy found someone new they would both remain coupled up for the next part of the show (with new partners). If Curtis and Amy both decided to remain loyal to their initial coupling they will be reunited after the girls are allowed to return to the original villa and will remain in the show as a couple. However if for example, Curtis decided to couple up with a new girl whilst Amy remained loyal, not only would there be some heartbreak, Amy would then exist in the show as single, making her vulnerable to elimination. The same result applies for the reverse. I have put these outcomes into a payoff matrix to help visualise the game 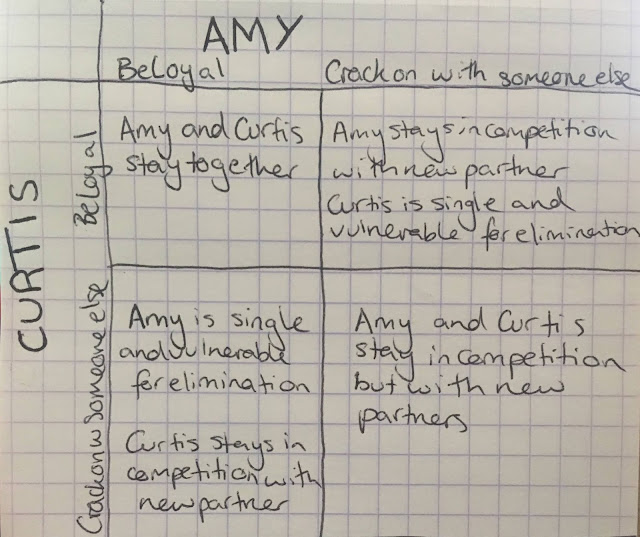 Purely considering these outcomes as separate from how much Curtis and Amy trust each other, the option that guarantees security for each individual is to 'crack on with someone else' because then regardless of what the other person does, they will remain secure in the competition. An important element in this game is that neither person is able to predict with certainty what the other person will do or is considering and so the safest option is to maximise the utility of the individual.
We can see this security dilemma in its most common use within security politics and international relations 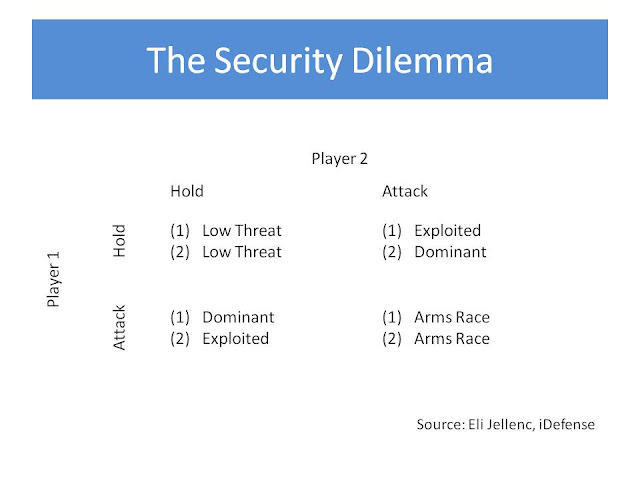 In the context of geopolitical security measures, not knowing the military capacity or intention of another state leads to the same security dilemma. Whilst the most beneficial outcome is for both countries to hold out on building themselves up militarily, the attack option is the only option to guarantee security. This can lead to an arms race as each nation continues to preemptively bolster their military in anticipation of hostility or threat that may not even have been voiced in order to prevent a situation of submission to the other nation.

Prisoners Dilemma
A second example of game theory used in Love Island is a version of the famous prisoners dilemma. In the final episode, the couple that wins the competition faces a final challenge. The couple is asked whether they want to choose love or money. A variation of split and steal, the contestants in the past (more recently this has been altered slightly) have been asked to place their answer into an envelope which is then revealed. The couple make this choice independently and do not see what their partner has selected. If both contestants choose love, the £50 000 cash prize is split 50/50 between them. If both contestants choose money, neither of them get anything. However if one of the couple choose money whilst the other chooses love, the contestant who chose money is awarded the full £50 000. Again I have attached a payoff matrix to illustrate this 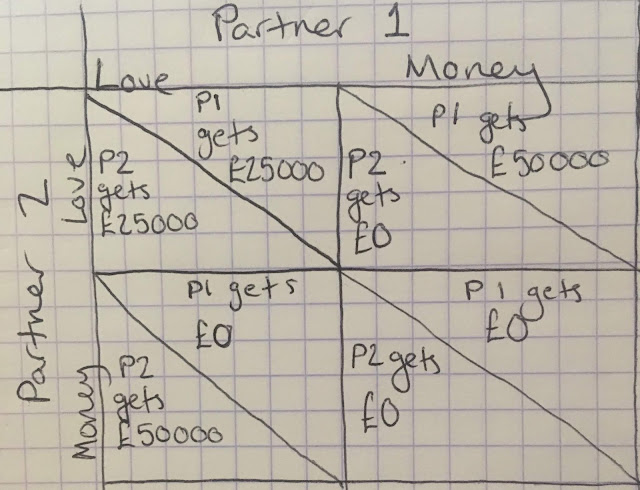 In this situation, there is an incentive to choose money as this provides the individual with the highest payoff, however if both choose money neither win anything. This encapsulates the 'doomed' dilemma. Of course in Love Island where you are playing for a lot more money once the show is finished through public appearances, there is also an incentive to remain publicly popular. It is maybe unsurprising then that nobody has chosen to steal the money yet. However other game shows are less constrained by such problems. See the clip below for a version of this dilemma where the participants are able to communicate before making their decision, contributing a further psychological game to the situation.

So maybe there is some value to watching Love Island after all right?
P.S. for more game theory and TV show cross overs read http://www.shecon.co.uk/2018/10/game-theory-and-drag-queens_22.html
Posted by Jocelyn Gaitskell on July 01, 2019
Email ThisBlogThis!Share to TwitterShare to FacebookShare to Pinterest