Economics and the Problem of Exclusion

This week, hidden amongst headlines of Brexit analysis and suggested recipes for weekly culinary inspiration, my news app notifications presented me with a headline from the economist. 'A dispiriting survey of women’s lot in university economics'. When searching for the article again for the purpose of this blog post, the economist website provided at least 7 articles directly challenging a persistent bias within academic economics. The survey referenced in the initial article listed a number of common experiences reported by female economists trying to succeed in academia. Conducted by the American Economic Association, the findings are disheartening. Women and non-white economists reported the smallest rate of satisfaction, pointing to a lack of the feeling of being valued. This group was also more likely to report facing discriminatory treatment in seeking work, with half of women identifying with this experience and 29% of non-white economists. Heavily noted were instances of sexual assault, harassment and inappropriate interactions within their professional environment, with a sizeable minority sharing that they had been asked to perform sexual favours in order for career progression. Academia in general is notorious for sexual harassment, ranking second only to the military. Further evidence carried out by Professor Heather Sarsons found that female publications have less of an impact on receiving tenure at universities than their male counterparts. 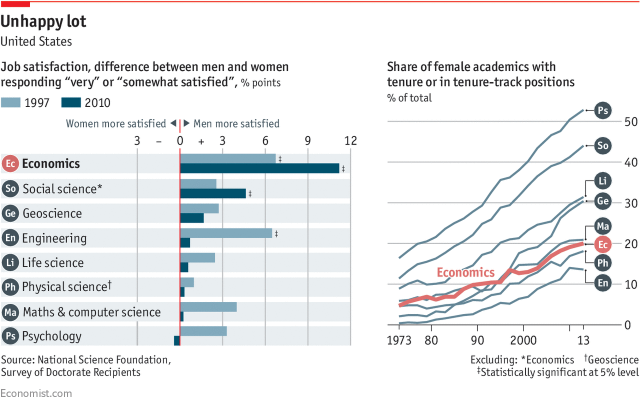 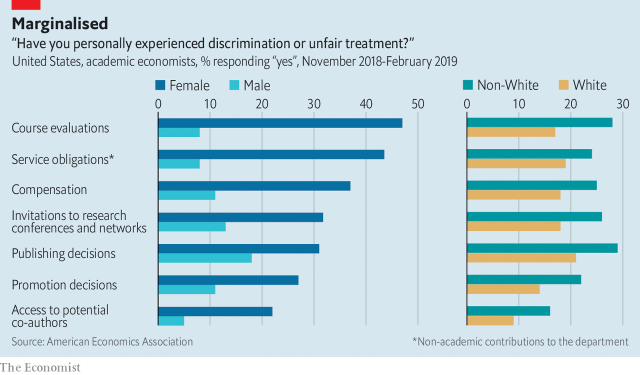 Clicking on to the next article revealed more research pointing to an endemic problem within economics towards women. Professor Donna Ginther describes how women face a thicker glass ceiling in economics, with reduced chances of reaching tenure, becoming professors, and embarking upon PhDs compared to men. The differences in policy preferences between men and women add another layer to this problem, a 2013 study suggested that men were more likely to favour deregulation and lower minimum wages than women. If women continue to be pushed out, a skewed orthodoxy is created with ingrained bias that has already proven a point of criticism for this profession in the wake of the financial crash.
These reports can feel disheartening. The next two held more hopeful conclusions, seeking to suggest ways in which economics can face this problem head on. The first suggestion encourages the use of economic tools themselves, collecting and analysing data to identify the areas where economics discriminates against women. A second challenge may sit more uncomfortably within the profession, encouraging innovation of teaching styles and content, rearranging tutorials to encourage an inclusive space without ridicule or overbearing voices, shifting from the traditional norms of the subject.' How economics is trying to fix its gender problem' talks of mentoring between senior and junior economists, providing forums and groups where advice is readily available and support is provided. Instituting a more explicit code of conduct is another idea circulated within the AEA to create a "professional environment with equal opportunity and fair treatment for all economists" although the lack of sanctions takes away its punch somewhat. A female push to resolve the problem is only part of the solution however. As asserted by Rohini Pande from Harvard University“this cannot just be the work of women.” Male economists must also take ownership of this flaw, uniting with female colleagues to show them their experiences are being heard and will be met with action.
Posted by Jocelyn Gaitskell on April 01, 2019
Email ThisBlogThis!Share to TwitterShare to FacebookShare to Pinterest