I am going to list two options below; have a think about which of the two is most likely to induce you to make a donation.

1) Any money that you donate will go to Rokia, a 7-year-old girl from Mali, Africa. Rokia is desperately poor, and faces a threat of severe hunger or even starvation. Her life will be changed for the better as a result of your financial gift. With your support, and the support of other caring sponsors, Save the Children will work with Rokia’s family and other members of the community to help feed her, provide her with education, as well as basic medical care and hygiene education

2) Food shortages in Malawi are affecting more than three million children. In Zambia, severe rainfall deficits have resulted in a 42 percent drop in maize production from 2000. As a result, an estimated three million Zambians face hunger. Four million Angolans—one third of the population—have been forced to flee their homes. More than 11 million people in Ethiopia need immediate food assistance

This is the question posed by Small, Loewenstein, and Slovic in a 2006 study attempting to decipher people's responses to charity appeals and the effectiveness of using the smaller versus the bigger picture. The study in fact concludes that most people are likely to respond more positively to option 1 than option 2. This is described in terms of the 'identifiable' life and the 'statistical' life. Identifiable life refers to a specific case and personal story as opposed to the broader population impacted less visibly through conceptualisation as statistics. Indeed we often see charities use this trend in advertisement and donation appeals, highlighting individual stories to encourage sympathy and eventual donation. This dissipation of donation when statistics are relied upon instead suggests the most successful appeals are those made to the heart not the rational mind. Small et al suggest this links with individual perception that a donation will make a difference. The individual case appears more feasible to solve than the millions facing starvation in Ethiopia. The attachment of different weights to identifiable v statistical lives and implications of perceived donation viability is extended further within this paper. When the researchers presented both the identifiable life and statistical lives to an individual, overall donations actually decreased in comparison to when individuals were only presented with one. This would appear to reinforce the idea that the decision to donate is somewhat correlated with the perception of its success. 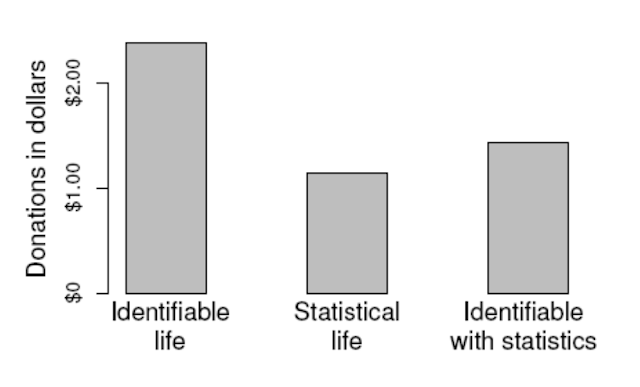 The paper is yet another insight into the difficulty in assuming human beings act in a rational way, highlighting the importance for assumptions and hypotheses to be studied in order to accurately reflect the reality of human decision making. Humans are impacted by emotion as opposed to pure logic, and underestimating this factor implies a serious gap in understanding. As the authors conclude ''although victim identification may distort aid allocation somewhat, its impact generates more aid than any other pitch." Thus maybe appealing to the rational mind is not a universally successful approach.

To read the study:
http://citeseerx.ist.psu.edu/viewdoc/download?doi=10.1.1.565.1812&rep=rep1&type=pdf
as well as a more concise article about the method:
http://knowledge.wharton.upenn.edu/article/to-increase-charitable-donations-appeal-to-the-heart-not-the-head/
Posted by Jocelyn Gaitskell on March 04, 2019
Email ThisBlogThis!Share to TwitterShare to FacebookShare to Pinterest