As a second year university student, one of the things I have been prioritising over the past months is internship applications. In a post-exam world, my plunge into this sphere of research and interview prep has become more complete, scouring student room forums for any hint I can extrapolate and watching YouTube videos to convince myself of their productive value. The particular role I am applying for is related to technology within business, an area of increasing contemporary significance within human innovation more broadly as well as the more micro scale of firms.

What has struck me the most in my research of technology has been our inability to foresee the implications of its creation. A conceptual buzzword that has kept popping up is 'technological singularity'. Technological singularity concerns the hypothesis that the creation of an Artificial Super Intelligence with the intellectual capacity to exponentially surpass human comprehension, will trigger technological growth able to alter human civilisation in ways we cannot predict. The creation of ASI could be humankind's last invention. This hypothesis would come to fruition due to the self teaching nature of AI, coupled with unlimited data and resources. Whilst initially, reaching a human level of intelligence could take considerable amount of time, once this is learnt, such processes can be replicated and completed much faster. To understand the mechanics of this further see the video below:
Beyond the technicalities of how ASI could be created, the implications for our existing systems of government and societal organisation are of particular interest. Within a new hierarchy of humankind being intellectually inferior to this creation, could we coexist? Elon Musk's approach is to integrate humankind with artificial intelligence with his new project Neuralink, contemplating implanting technology into the brain to connect with interfaces. Kasparov points to the current superiority of AI working alongside humans in chess when playing against pure AI technology in a so called 'centaur' team, potentially pointing to a complementarity between humanity and technology extending beyond board games.
Within technology dialogue is a fear of the accompanying shift in labour markets, displacing labourers with robots able to complete tasks with greater efficiency and accuracy. Is this next revolution of labour markets something that existing skills within the market are able to adjust to? Urban Wire speculates that those whose jobs are most likely to be affected often don't have the necessary skills to fill the newly created jobs. And whilst PWC illustrates that initial impact is minimal with only 3% of jobs at risk of autmoation by the early 2020s, this figure increases to 44% by the mid 2030s. 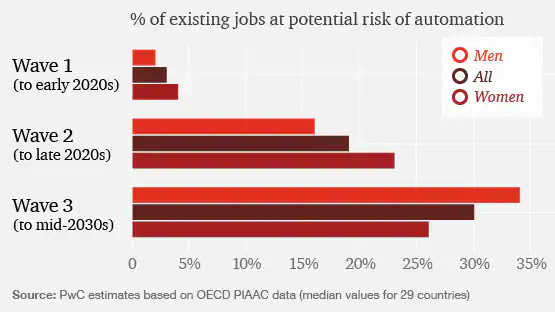 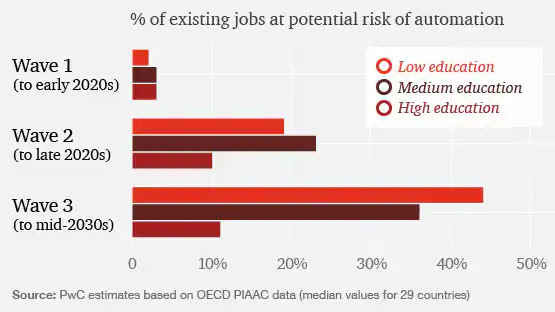 Undeniably, automation and emerging technology does pose a threat to certain sectors and the jobs within them. But does this equate to something we should fear? Change is a natural part of progress and amidst all the unknowns regarding the role of humans within a technology dominated economy and broader world, we should be seeking to prepare and anticipate the skills we might need. As PWC contends, business and government need to work together in order to encourage education and retraining schemes for career changes. This emphasis upon training and educating future skills enables us to remain equipped for an evolving job landscape.

Visit https://www.pwc.co.uk/services/economics-policy/insights/the-impact-of-automation-on-jobs.html for an interactive look at how automation may impact different sectors across the world.
Posted by Jocelyn Gaitskell on January 21, 2019
Email ThisBlogThis!Share to TwitterShare to FacebookShare to Pinterest