For the past week, I have been engaged in an impressive marathon of crammed revision for my very first Mandarin written assessment. When I first considered including this credited course within my second year university timetable, my rose tinted visions of fluency goaded me forward, hopeful that the  inclusion of a Mandarin course on my curriculum vitae would help me stand out from the rest in my applications for internships, as well as broadening my skills on a more personal level. This phenomenon is by no means new, many of my peers engage in the same thought processes, constant reminders of how competitive the graduate job market can be spurs on students to challenge themselves beyond their mandated curriculum. The golden ticket that we are all seeking has helpfully been given a name within economics; human capital. Claudia Goldin, professor of economics at Harvard, defines human capital as 'the stock of skills that the labour force possesses.' Simply put, human capital encapsulates the broad spectrum of knowledge, personal attributes, skills etc that contribute to each unit of labour's (each person's) capacity to produce economic value.
Increasingly, investment into education within workplaces is seen to have tangible consequences for a company's bottom line. This would seem logical, labour is a factor of production necessary to carry out tasks that generate an income, and investment in improving education and capability suited to a particular job should see improvements in productivity and efficiency. Moreover, dedicating time and resources towards betterment of employees can often enhance feelings of job satisfaction as well as retention as employees feel they are a valued element within the company; the fact that 44% of employees highlight lack of opportunities for development as a major area of stress in the workplace illustrates that human capital holds value for employees as well as the employer. 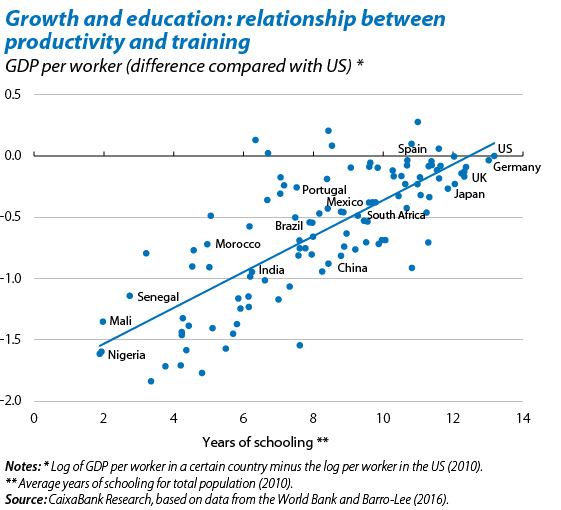 Recognising education as an investment can also hold important consequences and opportunities beyond a traditional economic lens. Viewing education as a driver of growth can increase accessibility to opportunities. Incorporation of human capital into mainstream development economics and shift of consensus to incorporate expanded access to education and skill based learning broadens the recommendations being proposed for development plans. This in turn holds the potential to narrow employment gaps between men and women, even if for more growth oriented motivations as opposed to altruistic social intervention.

Criticism has been articulated surrounding how much human capital does actually contribute towards enhanced employability. Michael Spence and Joseph Stiglitz have posited an alternative; signalling theory. This stream of thought challenges assertions that education in itself contributes to human capital, rather workers with greater access or ability are signalling to employers by virtue of the institutions they go to and education they receive. A classic example would be the status associated with graduating from Oxford or Cambridge, even if the content of the degree itself may not directly correlate with job specific knowledge.

Furthermore, the flip side to the championing of human capital should not be overlooked. The reality is that human capital is not just related to investment in those already employed or policy recommendations for developing countries; as alluded to above with my endeavours into broadening my CV, increased recognition of the value of human capital increases the demand for extra skills that may complement your chosen career. This encouragement to constantly be better can go beyond a helpful motivation. A hyper-competitive jobs market seeking infinitely well rounded employees does take a toll. The Netflix documentary 'Take Your Pills' considers the rise in 'study drugs' such as Adderall, intended to treat ADHD, a trend symptomatic of increased academic expectation and anxiety. A 2014 study found that 20% of college students in America report abusing prescription drugs compared to 14% of students not in college. By 2017 the initial figure of 20% had increased to 30%. In the UK use of 'smart drugs' has increased from 5% in 2015 to 23% just two years later. Such a perception amongst students that in order to achieve certain grades they need focus beyond their standard capacity should give pause for thought. When considered alongside rising reports of low mental health well-being in universities (with 1 in 3 students experiencing depression and 1 in 10 struggling with a diagnosable mental illness) it would appear worthy of investigation to consider the impact this holds. This is not to say that engaging in extracurricular activities and striving to be the best you can be academically is not important and healthy for development, however self-evaluation of our individual capacities should not be sacrificed for this end. Because ultimately, 'labour' should be more than just the value it can produce, and a fostering of self expression beyond pure competition and calculation is essential for the creation of a happier workforce.
Anyway, time to get back to my Mandarin...
Posted by Jocelyn Gaitskell on December 10, 2018
Email ThisBlogThis!Share to TwitterShare to FacebookShare to Pinterest