How to Change the World (Realistically) 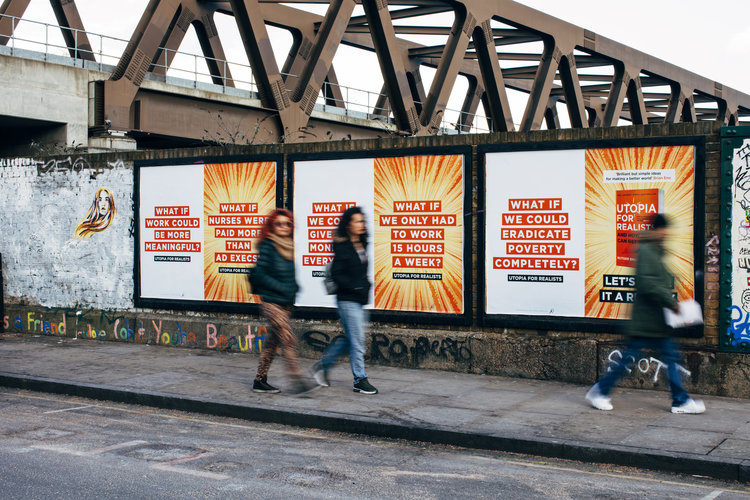 My first glance of the neon cover claiming to resolve a potentially oxymoronic challenge was one of intrigue, with just the right hint of skepticism to confirm I could qualify as the ‘realist’ Rutger Bregman addresses. After decadently treating myself to two (!) books not required for my university syllabus, I approached the book with a particular anticipation. ‘Utopia for Realists’ sets out to provide a number of compelling, evidence-based arguments for concepts beginning to appear upon the fringes of the ‘Overton Window’ of political possibility, a pol/econ student’s dream for the arguing emblematic of the degree. Those close to me can attest to the excitement this book delivered, confirming my passion for a subject which can all too easily be clouded by political charades and recent failings in economic forecasting capacities so prevalent within current news circulations. Bregman achieves the crafting of political hopefulness so refreshing to see within bookshelves allocated to politics crowded with doomsday messages of a Brexit yet to happen and the professed inevitability of disintegrating democracy. If we can anticipate a problem, this book encourages the forging of a solution, rather than succumbing to a paralysing fear of future progress.

Bregman, historian and author hailed by the Guardian as a ‘Dutch wunderkind of new ideas’, is nothing if not ambitious with this book, proposing the viability of concepts which challenge seemingly integral economic structures. Deliberately provocative chapter headings such as ‘why we should give free money to everyone’ play upon common reticence to such absurd suggestions yet, the meticulous research and academic experimentation provided to back up such assertions challenge these initial prejudices, with Bregman referencing surprising advocates such as Nixon’s basic income bill and surrounding research. Indeed several concepts discussed such as shorter working weeks are shown to be historically successful in the aiding of accelerating industrial capitalist development in productivity and efficiency terminology (Kellog’s introduction of a six hour work day lowered production costs so much that wages were boosted and accident rates almost halved whilst Ford’s reduction of the workweek markedly increased worker productivity). Modern issues are anticipated and addressed in such a manner, with universal basic income and shorter working weeks responding to fears of artificial intelligence, whilst a radical proposition of open borders responds to fears of stagnating economic growth and uneven wealth distribution. Thus the discussions provided in this book are contemporary and exciting, challenging existing notions of political responsibility and capacity to respond to modernity. Moreover, this read was refreshing in its honesty; Bregman dedicates space to a recognition of his own subjective authorship, using Festinger’s studies on selective media consumption to illustrate his own struggles in articulating concepts such as basic income and whether to incorporate certain studies contrary to his position of endorsement. Such admissions encourage further debate, amplifying a purpose of discussion and dreaming as a collective and holding one another accountable within this process of forging uncertainty.

The real achievement of this book however is its capacity to invigorate and rejuvenate, not just those on the left of the political spectrum,  but a population of thinkers, to not confine themselves to existing patterns of thought or reject seemingly counterintuitive ideas upon first glance. Forging new utopias becomes, as promised, a realistic enterprise which all individuals should strive to mould rather than a fantastical endeavour confined to radical bloggers and fringe intellectuals.
Following a narrative consistently tracing successes within frameworks commonly dismissed, Bregman demonstrates a powerful, contagious hope, using this momentum to pose a challenge to the seemingly dormant left. Closing anecdotes focus on the Mont Pèlerin Society, founded by 39 classical liberal scholars in 1947 to discuss resolutions to their perception of a grave state of economic consensus, and now famous voices of Friedman and Hayek. The pure power of ideas is illustrated through the early conceptions of neoliberalism, certainly the ‘utopia’ this collection of intellectuals was trying to achieve seemed impossible in the presence of Keynesian giants dominating economic direction. Moreover, Bregman claims, this power remains accessible to the modern left, even in the face of an apparently unwavering global consensus towards the new ‘utopian’ neoliberalism. The gravity of the stagnation on the left is illustrated through the incoherent collapse of certain neoliberal philosophies and governmentalities following global financial crises alongside the capacity for ‘authoritarian neoliberalism’ to persist within institutions, a phenomenon Bregman acknowledges and pleads with the left to respond to.


Thus ‘Utopia for Realists’ closes on a call to arms of sorts, illustrating a pathway for modernity for the left were they to reach for it. The utopias evaluated within the pages implore both realists and optimists to begin to implement and pursue these dreams; the concept of utopia itself in its completeness though never attainable, serves to excite rather than overwhelm, highlighting the necessity for the journey forward to have a place for innovative voices who are never satisfied with the current reality.

What future realities excite you (or terrify you)?

Posted by Jocelyn Gaitskell on October 01, 2018
Email ThisBlogThis!Share to TwitterShare to FacebookShare to Pinterest